This cinnamon roll icing is perfect for anyone who’s not a fan of cream cheese frosting. You’ll love the drizzly consistency and cozy vanilla flavor! Pair it with my delicious Quick 1 Hour Cinnamon Rolls.

This is just an overview, click here to jump down to the full recipe card for the recipe amounts and condensed recipe instructions.

PS. If you like cream cheese, my cream cheese frosting for cinnamon rolls is even tastier than this quick glaze!

How to Make Cinnamon Roll Icing Without Cream Cheese:

Print this recipe! Click here to jump down to full recipe card for the condensed, printable recipe.

Here are some variations to try:

Storing: Store this icing in the refrigerator for 4 to 5 days. Let it come to room temperature before you use it, then stir. You may need to add a bit of milk to reactivate it.
Freezing: You can freeze cinnamon roll icing for 2 to 3 months in an airtight container or freezer bag. Let it thaw in the refrigerator overnight.

What are some alternative toppings for cinnamon rolls?

Powdered sugar, a drizzle of honey, whipped cream, fresh berries, chocolate drizzle, or caramel sauce are all delicious toppings for cinnamon rolls if you don’t want to use frosting.

How long should you wait before icing cinnamon rolls?

Your cinnamon rolls should still be warm when you drizzle them with this simple cinnamon roll icing, but you should let them cool for at least 10-15 minutes to keep it from melting completely.

Do you put icing on cinnamon rolls before baking?

No. Cinnamon rolls are baked first, then the icing is added.

Whether you don't like cream cheese or don't have it on hand, you'll love this easy cinnamon roll icing made without cream cheese! It's perfect for drizzling over freshly baked cinnamon rolls and takes less than 5 minutes to make! Makes enough to glaze a 9×13 pan of cinnamon rolls. 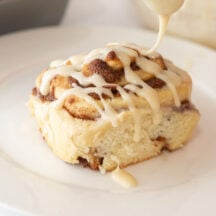 Print this Recipe
5 from 9 votes
Did you make this recipe?
Leave us a review

Before you begin! If you make this, will you do me a huge favor and leave a review and rating letting me know how you liked this recipe? This helps my small business thrive so I can continue providing free recipes and high-quality content for you.

Last Step! Please leave a review and rating letting me know how you liked this recipe! This helps my small business thrive so I can continue providing free recipes and high-quality content for you.

Nutrition is auto-calculated and for frosting recipe only; based on 16 servings.