This is the best cream cheese frosting for cinnamon rolls! It’s fluffy, creamy, and has the perfect balance of sweet and tangy flavors. Whip it up in one bowl, in under 10 minutes!

Why I Love This Cream Cheese Frosting for Cinnamon Rolls

Tip: To make it closer to the Cinnabon frosting recipe, add a squeeze of fresh lemon juice!

This is just an overview, click here to jump down to the full recipe card for the recipe amounts and condensed recipe instructions.

Tip: Want to make a copycat Cinnabon cream cheese frosting? Use the recipe below and add a squeeze of fresh lemon juice.

How to Make Cream Cheese Icing for Cinnamon Rolls

Looking for more of a glaze than a frosting? Simply add milk a tablespoon at a time until it reaches your desired consistency or use my more pourable cinnamon roll icing!

Do cinnamon rolls with cream cheese frosting need to be refrigerated?

Yes, if not eaten within 1-2 hours the cream cheese cinnamon rolls should be stored in the refrigerator or the frosting can go bad. While they’re best eaten right away, they can be refrigerated for a few days or even frozen (see below).

Can I freeze cream cheese frosting?

Yes, cream cheese frosting can be frozen in a zip-top freezer bag or airtight container for up to 3 months. Let it thaw in the refrigerator before you use it.

I also love wrapping the frosted cinnamon rolls individually, freezing them, then microwaving them for 20-30 seconds when ready to eat!

Can I make cinnamon roll icing without cream cheese?

Yes, you can make a buttercream frosting without cream cheese by using my cinnamon roll icing recipe! It’s more of a quick, pourable glaze.

What is the frosting on cinnamon rolls made of?

The best cream cheese frosting for cinnamon rolls! It's easy to make, creamy and fluffy, and it has the perfect balance of sweet and tangy flavors.

This recipe makes enough to generously frost a 9×13 pan of cinnamon rolls. 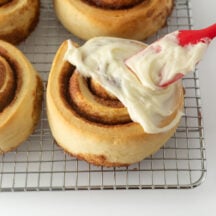 Print this Recipe
5 from 9 votes
Did you make this recipe?
Leave us a review

Before you begin! If you make this, will you do me a huge favor and leave a review and rating letting me know how you liked this recipe? This helps my small business thrive so I can continue providing free recipes and high-quality content for you.

Last Step! Please leave a review and rating letting me know how you liked this recipe! This helps my small business thrive so I can continue providing free recipes and high-quality content for you.

Nutrition is auto-calculated and for frosting recipe only; based on 16 servings. This recipe makes enough to generously frost a 9×13 pan of cinnamon rolls.

Tag me on Instagram @designeatrepeat or leave a comment below to let me know how it turned out! I love seeing what you’ve made.
Previous Post
Cinnamon Roll Icing
Next Post
Easy Chocolate Ganache (without cream!)